The RSPB reserve at Leighton Moss is the largest area of reed beds in the north west. I lived in Carnforth until 2012, and so it was right on my doorstep. As members get in free, I’d often have a wander in just to see if there was anything interesting to be seen and sometimes have tea and a scone in the tea shop. My main memories were of hides that were getting a bit worse for wear, and where you had to make sure you hooked up the windows properly otherwise you risked getting whacked on the top of the head while peering through your binoculars.

There was quite a difference when I visited at the beginning of June. It was a lovely sunny day, and I’d just driven up from the south-west so I popped in for about an hour to see the new sky tower that I’d read about. But that wasn’t the only change.

The visitor centre looks like a barn conversion, with the shop, entrance and toilets downstairs and the tea shop upstairs. The area behind the building used to be a staff/disabled car park. Now it has raised beds with bee-friendly flowers (labelled, so you can copy the planting), with shady and sunny places to sit. In the woods just beyond there are plenty of picnic tables, and a place with bird feeders to get some close up views of woodland birds.

The paths through the reserve are partly winding through woodland, and partly through the reed beds. As such, the normal view from the paths (as opposed to from the hides) is of either trees or reeds, with the occasional view into small pools. 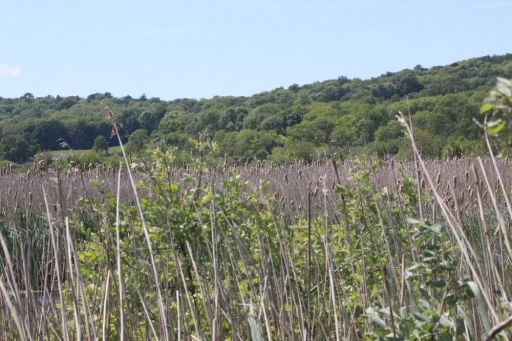 The normal kind of view from the paths.

One of the pools viewed from a path.

The skytower is not far from the visitor centre, and climbing it allows you to get a view across most of the reserve. You can, of course, see across the reserve from the surrounding, higher countryside, but the tower gives you a much closer view. 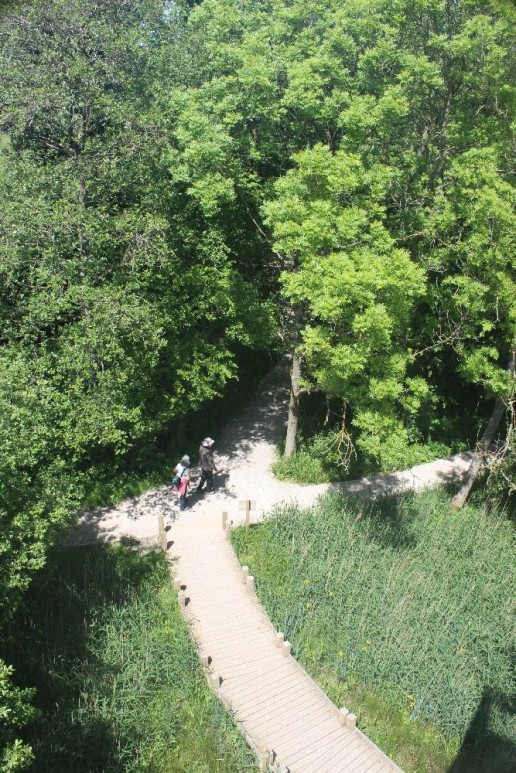 There weren’t many birds around during my short visit, but I did enjoy standing on the top and just watching the wind blow the tops of the trees below me. It was also a good place to take a panorama of the lagoons. The water level was very low, I think because of work they were doing to maintain the reed beds.

Is this skytower an eyesore, I hear you ask. Judge for yourselves – it is in the photo above captioned ‘The normal kind of view from the paths.’

There are 8 hides altogether on the reserve (I think!). Two of these are quite luxurious, with large glass windows where you can sit to look out over the lagoons, as well as the more normal benches with drop down windows to look through (but that let the wind in on cold days!). A couple of hides are some distance away, right next to the coast, and two more are reached by walking across the causeway – a public footpath that crosses the middle of the main part of the reserve. The hides I went to all looked to have been rebuilt relatively recently, and the windows now open outwards and downwards, so nor more risks to heads!

The old way to get to the causeway involved walking along a road. Not a busy road, but still a road. There was an off-road footpath part of the way, but this has now been extended by a new boardwalk that crosses that corner of the reed beds, and gives a view of the vegetation and the wildlife that you don’t get from the gravelled paths elsewhere. 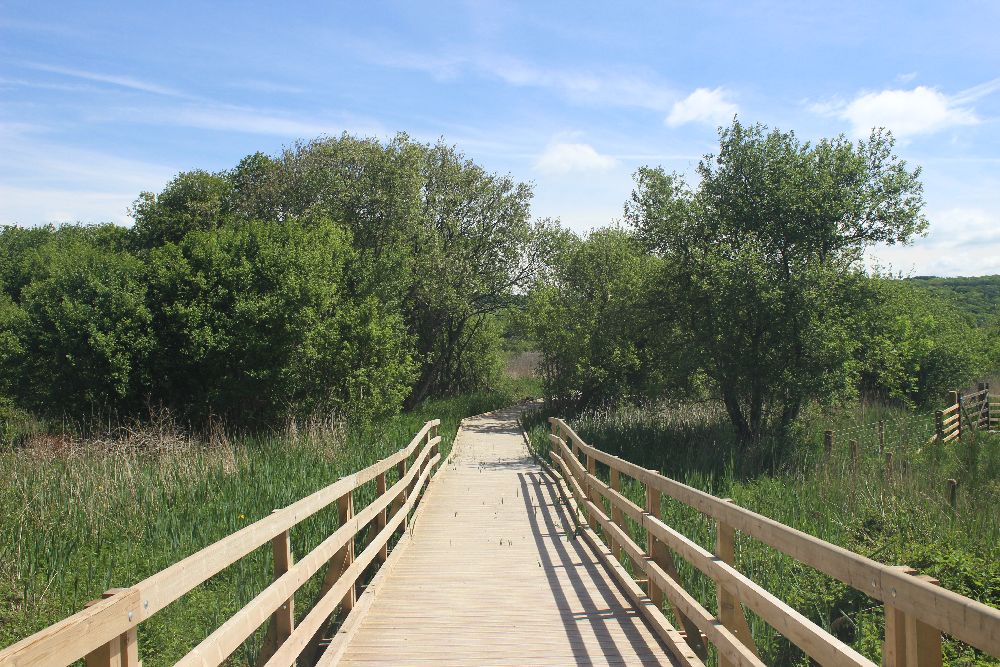 Part of the new boardwalk

View from the Causeway hide – sadly more flowers than birds when I was there!

The reserve is a great place to go at any time of year. On this hot, sunny day it was lovely to walk along some of the wooded paths, and see the irises in bloom. On horrid days, put your wellies on, take a flask, and sit in one of the hides spotting birds. The reserve is only 10 miles from the self-catering cottage in Levens, and you get in free if you go on public transport or by bicycle – and it is a lovely scenic ride too.

This site uses Akismet to reduce spam. Learn how your comment data is processed.