Foulshaw Moss is a few miles from the cottage at Levens, on the southern edge of the Lake District. Part of the area is owned by the Cumbria Wildlife Trust.

I’d read that there were ospreys nesting there, so I thought it was time for a visit. I saw the osprey’s nest, and with the aid of a ‘scope provided by one of the volunteers on site I might have seen the head of one of the ospreys… but what I really enjoyed was the discovery of a totally different landscape.

But first, the ospreys… 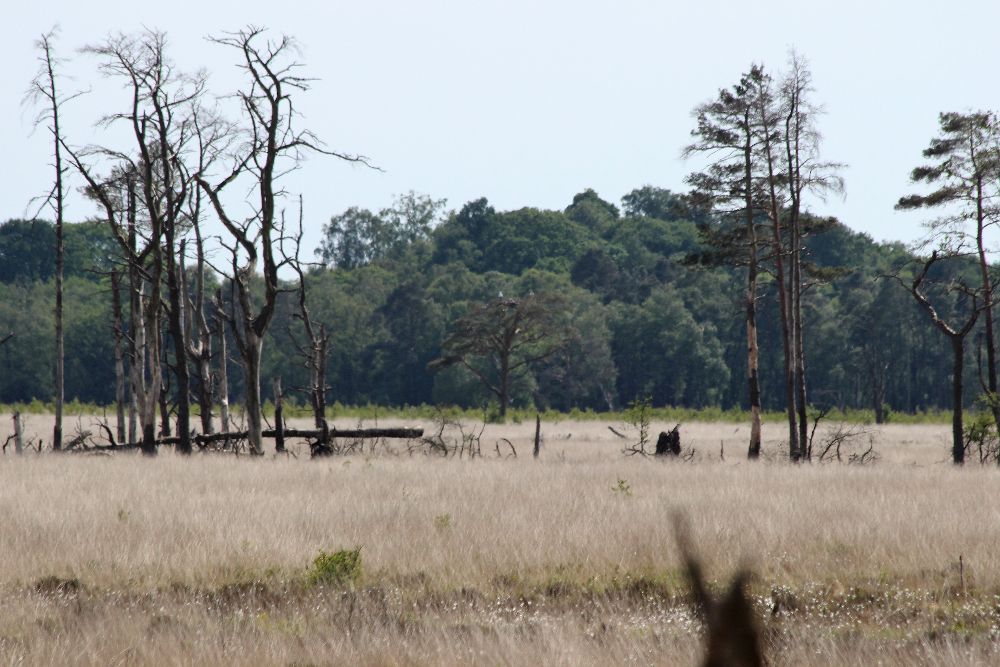 The nest is in the tree in the middle distance.

The second pic is with my 300 mm zoom lens, and is similar to the view through the scope. Ah, I thought, I can see one of them sitting on the left of the nest! But no, that’s one of the cameras used for the nestcam.

What was impressive was a mocked-up full size nest on the way onto the reserve. I didn’t manage to photograph anything for scale, but the eggs looked to be a similar size to hens eggs. There were some quite large lumps of wood there, but the volunteer on duty assured us that the real nest contained pieces of a similar size.

Apparently the ospreys have been seen feeding at the RSPB reserve at Leighton Moss, just the other side of the Kent estuary from Foulshaw – so ironically that might be a better place to try to see them. But the reserve at Foulshaw is still worth a visit for the different landscape, and for the wildlife that lives in peat bogs.

Until a few years ago the area to the south of the A590 was forested, then the trees were sold and there were plans to sell of all the underlying peat to be bagged up for garden centres, with the hole that was left to be used as a landfill (all this according to the chap on duty at the entrance). Thankfully EU regulations prevented this and eventually the Cumbria Wildlife Trust, with the aid of various grants, managed to buy the land and restore the peat bog habitats. When I visited there was a small shed at the entrance with information about the reserve and the wildlife. They ask you to make a £3 donation unless you are a member of one of the Wildlife Trusts. There is a boardwalk that takes you on a short loop into the reserve, with a couple of viewing areas. At this time of year there are puffs of white cotton grass among the pools, and an interesting contrast between the wetland scenery in the foreground and the limestone hills to the north of the reserve.

The raised platform allows some distant views, and is also handy for looking down on the pond life. A better naturalist than me might be able to identify the dragonflies! 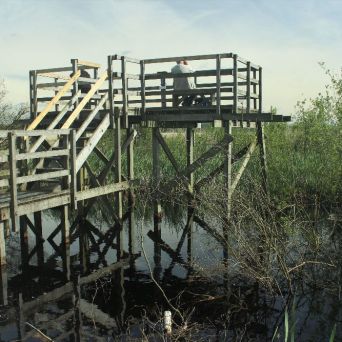 Further round the loop of boardwalk there are groves of birch trees that have been left, making amazing reflections in the still water. 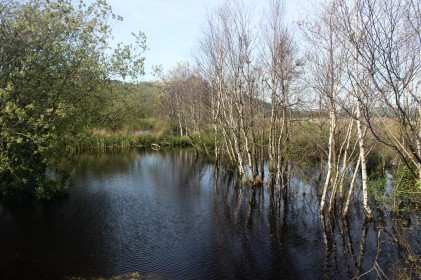 People on their way out were being asked if they’d enjoyed it. I certainly had, but there was one grumpy chap who muttered that he liked it better before the board walks were put in. Personally, I like keeping my feet dry, and also appreciate that the boardwalks limit where visitors can go – a reminder that these reserves are for the benefit of the wildlife, not designed primarily for tourists to wander around. In fact, many of the Cumbria Wildlife Trust reserves are not open to the public at all.

See the Cumbria Wildlife Trust page for directions to get there and a list of the wildlife that can be seen there. That site has a link to a google map – but if you are approaching from the east along the A590, the first trick is not to turn off at the white road sign that says ‘Foulshaw Moss’ – that has no access to the reserve. Carry on along the main road and there is a small sign on the left, just before you get to the blue ‘Dual carriageway 1 mile ahead’ sign.

One thought on “Ospreys and dragonflies – Foulshaw Moss”

This site uses Akismet to reduce spam. Learn how your comment data is processed.